Tsipras under pressure for concessions in debt talks 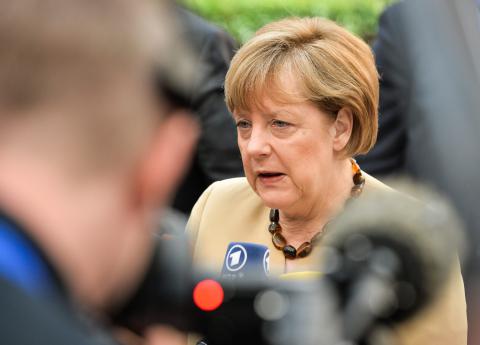 Greek Prime Minister Alexis Tsipras was under intense pressure to deliver crucial concessions to international creditors on Thursday to break a four-month deadlock and save his country from looming default that could pitch it out of the eurozone.

After late-night talks with the leaders of Germany and France produced no breakthrough, Tsipras was to meet European Commission President Jean-Claude Juncker in the afternoon to try to bridge remaining gaps on a cash-for-reform deal.

"At the end of the talks there was absolute unanimity that Greece will work intensively and full steam ahead ... in the coming days to solve all remaining issues," German Chancellor Angela Merkel said on arrival for the final session of an EU-Latin America summit.

The latest in a run of sleep-defying meetings in recent weeks was partly political theatre, as all involved try to show their commitment to a deal -- and avoid any blame for failing to avert a crunch that could unsettle the euro and the world economy. Tsipras again said he saw a solution at hand.

A senior EU official who has previously been glum on the prospects of an accord said there was now a good chance that next week would bring an agreement acceptable to Eurogroup finance ministers, who meet in Luxembourg on June 18.

People familiar with the talks said the two sides have come closer to agreeing a primary surplus target but are still wide apart on how to achieve it, with EU and IMF...

The number of infected and dead in Germany increases

Latest on the coronavirus: Global cases near 1.5 million

ECB said to have urged measures worth 1.5 trln euros this year to tackle virus crisis