BIRN Conference: Media Freedom Being Rolled Back in Balkans 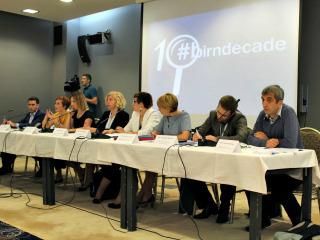 BIRN directors and media experts highighted the main obstacles to media freedom in the region and offered their own recommendations on how to improve the situation at the regional conference of the Balkan Investigative Reporting Network, entitled "Media Freedom Challenges", on Friday in Sarajevo.

"It is not just media freedom that has been in regression in the Western Balkans over the past years but democracy as well. Each year things get worse, bit by bit, which calls for immediate action before it is too late," Florian Beiber, from the University of Graz, said.

Beiber presented a list of recommendations to governments in the region to improve the situationof the media. They include stronger legal protection for journalists and curbing the practice of offering them only short term contracts, which keep people working in the media on a tight leash.

A moratorium was also proposed on state advertising, in order to reduce state influence and interference with the editorial policies of media outlets.

Another key recommendation was to establish clearer rules determining the ownership and the finances of media outlets - transparency issues - and prevent monopolies.

Regarding state broadcasters, clearer rules to ensure their independent funding and functioning were urged as a way to keep them out of the hands of governments.

Turning to hate speech and abuse of marginalized groups in the media, better training on hate speech as well as strengthening the power of the courts to tackle such issues was proposed.

The recommendations are a joint drive by more than 30 media professionals and experts who gathered in Sarajevo on Thursday at a regional freedom of expression workshop to discuss: working rights; the state funding of the media...