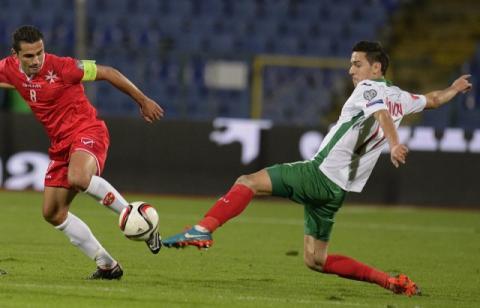 Bulgarian Georgi Milanov (R) fights for the ball with Roderick Briffa of Malta during their UEFA Euro Cup 2016 qualification soccer match between Bulgaria and Malta in Sofia, Bulgaria on 16 November 2014. Photo by EPA/BGNES

The Bulgarian men's national football team will face on Friday Malta in a vital qualifier for the UEFA Euro 2016, which will to a large extent determine whether the team will keep its chances of qualifying for the European championship next year.

The kick-off at the National Stadium in Ta' Qali is at 20:45 CET and the match will be broadcasted live on BNT 1 and BNT HD.

At present, Bulgaria occupies the fourth place in qualifying Group H with five points, behind the teams of Croatia, Italy and Norway, which have respectively 13, 11, 9 points.

In its last game against Malta in Sofia in November 2014, Bulgaria made a poor performance, drawing 1:1, which led to the dismissal of then coach Lyuboslav Penev and the appointment of his successor Ivaylo Petev.

In its latest qualifier against Italy in March, Bulgaria improved its performance and achieved a surprising 2:2 draw.

However in its last game, the friendly match against Turkey on Monday, Bulgaria suffered a heavy 4:0 defeat.

In order to preserve its chances of occupying the third place in the final standing, Bulgaria needs a victory in Malta and will hope that Azerbaijan will earn some points against Norway.

The top two teams from each group qualify directly for the final stage of Euro 2016 in France, while the third teams will face each other in play-offs.

In the other two games in Group H, the favourites Croatia and Italy face each other in Split, while Norway is host to Azerbaijan in Oslo.

The statistics show that Malta has never defeated Bulgaria in the thirteen encounters between the two teams, but at the same time Bulgaria has never qualified for a World Cup or European championship when in the same qualification group with Malta.

World’s largest museum for an artist opens in Oslo

Assailant with bow and arrows kills 5 people in Norway