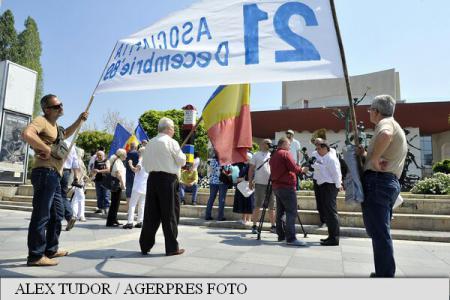 Before the debate, the association laid a wreath at ground zero in University Square, to the memory of the heroes killed in June 1990.

The 21 December, 1989 Association on Saturday marked 25 years since the June 1990 miners' riots with a public debate in Bucharest.

Before the debate, the association laid a wreath at ground zero in University Square, to the memory of the heroes killed in June 1990.

Attending the event hosted by the main offices of the December 21, 1989 Association were Senator Radu F. Alexandru, political scientist Alexandru Gussi, Andrei Oisteanu of the Group for Social Dialogue, Chairman of the Scientific Board of the Institute for the Investigation of Communist Crimes and the Memory of the Romanian Exile (IICCMER), Ph.D Nicolae Constantinescu, lawyers Antonie Popescu and Ionut Matei, as well as victims of the miners' riots.

They talked about the violent actions of June 13-15, 1990 and the reopening a criminal investigation of the event at the suggestion of the European Court of Human Rights (ECHR).

Ph. D Constantinescu told the debate moderated by Chairman of the December 21, 1989 Association Teodor Maries about the events of the days of the miners' riots. He said that on the night of June 13, 1990 he was an on duty doctor at the Coltea Hospital of Bucharest. 'I saw all this with my own eyes,' he said, adding that as far as the history of the miners' riots is concerned, there has been a sum of lies and misinformation.

"This is not about politics, but about history,' Zamfirescu said in his turn. He added that during the miners' riots he was attending a congress meeting in Copenhagen, where he saw first-page pictures from the events in Romania. In his opinion, what should be asked now is what happened afterwards, as justice proved passive on the matter.

"Light has to be cast, because human rights wee flagrantly violated,' said...