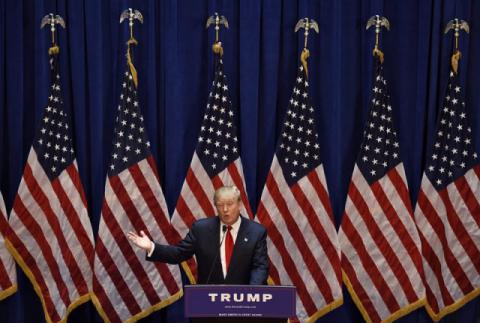 Businessman Donald Trump announces that he is running to be president of the United States during an event in New York, New York, USA, 16 June 2015. Photo: EPA

Businessman, billionaire and TV personality, Donald Trump announced on Tuesday his candidacy for the 2016 US presidential race.

Thus, Trump finally ended more than twenty years of flirtation with the idea of running for the White House, CNN reports.

During his statement, Trump expressed readiness to help make the USA a great country again, which is in line with the slogan of his campaign "Make America Great Again".

The real estate developer declared the American dream as dead and promised to bring it back to life with his candidacy.

During the speech at his Trump Tower on Fifth Avenue, Trump identified himself as "the most successful person ever to run for the presidency by far".

Trump's wealth, which he disclosed as standing at USD 9 B, and his successful business were pointed as the centerpieces of his presidential platform.

The businessman has been flirting with the idea of running for US President since 1987 and repeatedly expressed interest in 1999, 2004 and most recently in 2011.