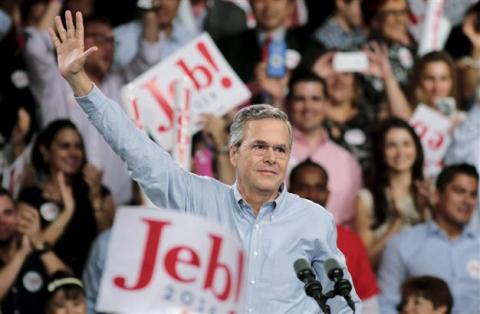 Former Florida Gov. Jeb Bush launched a White House bid months in the making with a vow to win the Republican presidential nomination on his own merits and stay true to his beliefs - easier said than done in a crowded primary contest where his conservative credentials will be sharply challenged.

Bush is unquestionably one of the top-tier candidates in a large Republican field of 11 major candidates that lacks a true front-runner. Wisconsin Gov. Scott Walker and Ohio Gov. John Kasich are among those still deciding whether to join a field that could end up just shy of 20.

For Bush, the 2016 Republican contest will test both his vision of conservatism and his ability to distance himself from family.

"Not a one of us deserves the job by right of resume, party, seniority, family, or family narrative. It's nobody's turn," Bush said Monday, confronting critics who suggest he simply seeks to inherit the office already held by his father and brother. "It's everybody's test, and it's wide open - exactly as a contest for president should be."

Neither his father, former President George H.W. Bush, nor his brother, former President George W. Bush, attended June 15 announcement. The family was represented instead by Jeb Bush's mother and former first lady, Barbara Bush, who once said that the country didn't need yet another Bush as president, and by his son George P. Bush, recently elected Texas land commissioner.

Before the event, the Bush campaign came out with a new logo - Jeb! - that conspicuously leaves out the Bush surname.

Bush sought to turn the prime argument against his candidacy on its head, casting himself as the true Washington outsider while lashing out at competitors in both parties...