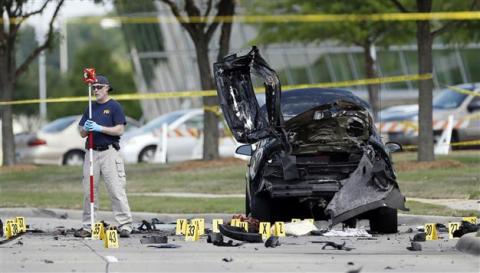 A US man was charged with helping to plan an attack on an event in Texas showcasing cartoons mocking the Prophet Mohammed and appeared in court June 16.

The Islamic State of Iraq and the Levant (ISIL) group claimed responsibility for the failed attack last month in which two gunmen armed with assault rifles were shot dead by a police officer before they could storm the event in a Dallas suburb.

However, US Defense Secretary Ashton Carter said the attack was inspired rather than directed by the militant group, which he called an "important distinction."

Abdul Malik Abdul Kareem is accused of providing the shooters with guns and helping them to practice using them in the desert near Phoenix, Arizona.

He is also accused of hosting the two gunmen along with "other persons known and unknown" at his home "to discuss the Mohammed Art Exhibit and Contest and their plan to travel from Phoenix, Arizona to Garland, Texas to conduct an attack on the contest," charging papers said.

Elton Simpson, 31, and Nadir Soofi, 34 -- who shared an apartment in Phoenix -- drove up to the community center hosting the event and started shooting as soon as they got out of their car.

They were killed by police before they could get inside. A security guard who was struck in the ankle was the only casualty.

The American Freedom Defense Initiative, a group listed by civil rights watchdog the Southern Poverty Law Center as an anti-Muslim hate group, organized the event, which drew about 200 people.

It was attended by Dutch far-right politician Geert Wilders and supporters held an exhibition of entries to a competition to draw caricatures of the Prophet Mohammed.