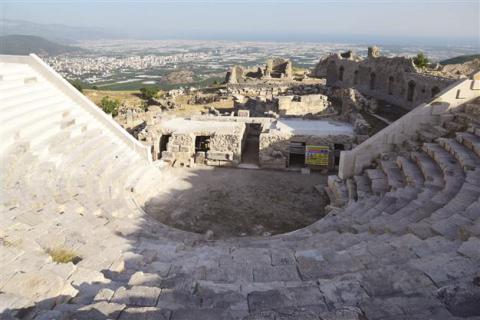 Opramoas, a businessman who lived in the ancient city of Rhodiapolis in the southern province of Antalya's Kumluca district in the 2nd century A.D. and was known as an important civic benefactor, has become a "honorary member" of the Antalya Industrialists and Businessmen Association (ANS?AD) upon the application of Professor Nevzat Çevik.

Akdeniz University Archaeology Department academic Çevik said there had been many benefactors in the past, but Opramoas was the most important one among them.

He said Opramoas, born in the first half of the 2nd century A.D. and known to have died in 152 or 153, was a very rich man and a Lycian, the pontiff in the temple and the clerk of the Lycian Union.

He said the "ancient businessman" earned money in the Roman Empire era by working in the banking, agriculture and trade sectors and gave most of his earnings to charity.

Çevik said that according to the writings on the walls of the temple-like grave made for Opramoas after his death, the amount of money he had given to charity was 3 million dinars, which was astronomic.

"Economically, it is hard to find its amount under today's date. For example, the two-story stoa [closed columned gallery] he built in Patara had cost 30,000 dinars. Let's imagine such big and expensive public buildings. We speak of 3 million dinar; it is enough to build 100 stoas. A big earthquake occurred in 141 A.D. in western Antalya. Many buildings collapsed? people died, diseases appeared. Opramoas revived different structures in 32 cities and helped everyone," he said.

Çevik said Opramoas also provided dowry for newly married couples and food for the poor. Çevik likened his acts to the ones in the month of Ramadan, adding, "But he was helping people...