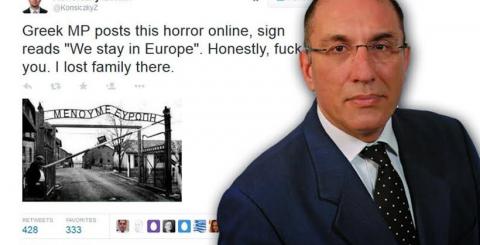 A Parliament deputy of the rightist-populist Independent Greeks (AN.EL) party, Dimitris Kammenos, received a tsunami of negative reaction over his post on Facebook, which depicts the infamous main gate of Auschwitz photoshopped to read “Menoume Evropi” (We’re staying in Europe) instead of the insanely cruel “Arbeit Macht Frei” (Work frees you), which greeted people as they were transported into the Nazi death camp.

One of the most popular reactions was by Hungarian journalist Konsiczky Zoltán, as seen below:

Kammenos, who says he has no relation to AN.EL president and founder Panos Kammenos, the current defence minister, claimed he was trying to draw an analogy of the current between European creditors and the Greek government. The small AN.EL party supplied the MPs to form a coalition government led by leftist SYRIZA, a “strange bedfellows” type of political arrangement.