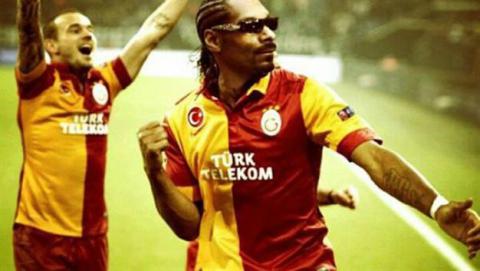 American rap star Snoop Dogg has shared a photoshopped image of himself in a Galatasaray jersey, leading to social media frenzy among Turkish football fans.

Snoop Dogg, aka Snoop Lion, shared the image on his Instagram account (followed by 5.4 million people) late June 24, with a comment that read "GooooOoaaaaaaallll." More than 110,000 people "liked" the image as of early June 25.

Galatasaray fans immediately flooded the comment stream of Snoop's Instagram account, joking that he could be the "big name" that the club's new chairman promised to transfer for next season. The move has also fanned the flames of the bitter competition between supporters of other football giants in Istanbul, namely Fenerbahçe and Be?ikta?, with each side claiming a better international reputation and accusing each other of jealousy.

The image shows Snoop's face superimposed over that of Ivory Coast football star Didier Drogba, who left Galatasaray for his old home, Chelsea, last season, with Dutch football star Wesley Sneijder, celebrating on the pitch. Sneijder is seen as likely to remain at Galatasaray after the Turkish giants clinched their 20th championship this season.

ESPN reported back in 2012 that Snoop has been following European football, or "soccer" as it is called in the United States, since the early 2000s, when his sons played and loved the FIFA video game during his tour of Europe. According to the report, the rap star loved the game so much that he became an official spokesman for the franchise, joining New York Giants receiver Victor Cruz and New York Red Bulls midfielder Tim Cahill as "FIFA 13" ambassadors.