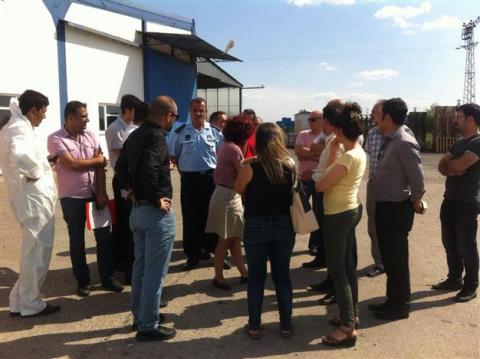 As many as 121 workers in a lighting factory have been poisoned after an unknown smell came from outside in Turkey?s northwestern province of Tekirda?, Tekirda? Governor Enver Saliho?lu said on July 1.

All 121 workers were taken to the local Muratl? State Hospital suffering from symptoms of nausea and vomiting, while several were reported to have lost consciousness at the factory, located in Tekirda??s Muratl? district. Among those affected were a pregnant woman and a worker with asthma.

Saliho?lu said blood samples taken from the workers would be tested and that the Disaster and Emergency Management Authority (AFAD), along with the Tekirda? Provincial Health Directorate medical staff, were inspecting the factory. AFAD is a state organization that deals with disaster management issues.

?Some 121 workers in the factory have been negatively affected by this smell. Most were given outpatient care.
Four of them were taken to the Tekirda? State Hospital because of severe exposure. Necessary medical treatment is being provided and [our workers] are not in a serious condition. Most of the factory workers are women. We are not able to say what caused the incident, but it will be revealed by the inspection,? he added.

An investigation has been launched into the incident and production in the factory has been suspended for the inspection.