The real Angela Merkel… from sexy to sour! (titillating photos) 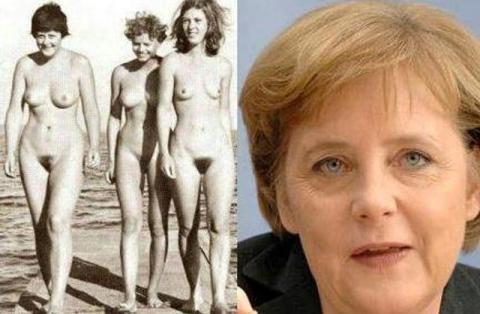 Love her or hate her… there’s lots to say about the German chancellor even when its not about politics.

Back in 2013, photos emerged of Merkel when she was a hippy at a nudist beach. The nudist blogger who discovered the photos said it may or may not have been Merkel strolling on the beach with her friends wearing nothing but her birthday suit, fueling the start of many opinion polls.

They say birds of a feathre flock together, but here’s Merkel with a crowd of skinheads dating from 1992 or 1993. One of the people in the photos does a Nazi salute in the presence of young Merkel. At the time, nobody thought anything of it but the photos were given a new significance years later.

Eating etiquette before she became the German Chancellor…

This is not the way to eat a pickled herring, but then again, when you’re the German Chancellor you can pretty much do anything you want!

Known for her wide-ranging facial expressions from sour to cringing…

On the contrary, her fashion style shows just one look, but you’ve got to give it to her in terms of color.