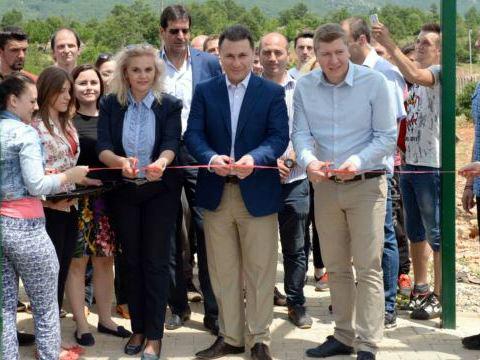 Macedonia's government is insisting that it is "business as usual" for Prime Minister Nikola Gruevski in spite of an ongoing deep political crisis in the country.

In the past week, when not participating in crisis talks with the opposition, Gruevski has made the most of opportunities to attend a series of high-profile promotional events.

In recent days, Gruevski visited the construction site for the new 23 km stretch of highway towards Greece, announcing that 64 per cent of it is now complete, opened a state-funded wind farm in Bogdanci and claimed that the government's debt cancelation campaign has helped 13,000 people write off some 25 million euros of debt.

Gruevski also visited factories, opened new playgrounds, attended a groundbreaking ceremony for a pedestrianised street, checked out the tourist season in the lake town of Dojran and announced more investment in that town.

"These activities are not unusual and are not part of any electoral campaign. They are part of the everyday work of the Prime Minister and the government as a whole," the government press service told BIRN.

"We should expect even more aggressive PR activities after the summer," Arsovski said, adding that the intent would be to try to repair the damage done to the government's reputation as a result of the...