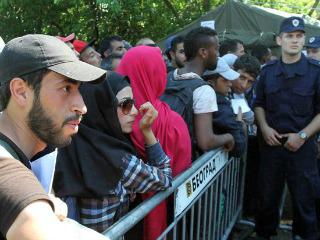 A new collective reception centre for migrants opened in the reconstructed building of the tobacco processing company in Presevo in the south of Serbia on July 8.

Vulin, who also chairs a working group on migration flows, said the new centre shows that Serbia is taking the migrant issue seriously.

"Serbia is taking care of every human being who is found on its territory... we are not here to judge anyone but have organized everything so every human being is provided with medical care, food and water," he said.

Many migrants, including women and children, fleeing war and persecution in Syria, Iraq and Afghanistan, are crossing Serbia on their way to the West, often exhausted after a long trip.

Vulin took the opportunity to criticized a recent report by the rights watchdog organisation Amnesty International, which said that migrants are routinely mistreated on their way through Serbia.

He said the report was untrue and that no members of the police or other officials abused or took money from migrants.

The Amnesty report, published on July 7, said migrants crossing Serbia and Macedonia are often arbitrarily detained by the authorities while their irregular status also makes them vulnerable to financial exploitation by law enforcement officers, who misuse their authority to demand bribes.

Soder, from the UN, said that he was pleased that the new centre had opened and said that the UNHCR would continue to assist Serbia in addressing the problem.

"With this [centre] we will create much better conditions for migrants who walk for days and are on exhausting...