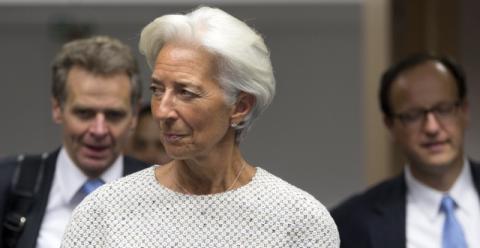 Managing Director of the International Monetary Fund Christine Lagarde, center, arrives for a meeting of eurozone finance ministers at the EU Lex building in Brussels on Saturday, July 11, 2015. Greece's negotiators head to Brussels on Saturday armed with

The International Monetary Fund (IMF) has criticised the EU over the terms of the bailout agreement, which had been agreed between Greece and the eurozone leaders on Monday.

The IMF said that the Greek public debt was now "highly unsustainable" and called for urgent debt relief on a scale "well beyond what has been under consideration to date", the BBC reports.

On Tuesday, the IMF made a public advice including proposals on writing off some of the Greek debt, which it had previously recommended to the Eurogroup at the weekend.

According to the IMF study, the EU would have to give Greece thirty years to repay all its European debt, including new loans and a dramatic extension of its maturities.

It added that in case no such extensions were considered, creditors might have to accept "deep upfront haircuts" on existing loans.

There have been signs of a growing split between the IMF and the European creditors on dealing with the Greek debt crisis, but this is the first time that such a disagreement has become evident.

A senior IMF official said that the fund will only participate in a third bailout if the EU creditors provide a clear plan as the current agreement was neither comprehensive nor detailed.

The split between the IMF and the EU comes just hours before the Greek parliament is to vote on the economic reforms, which Athens has to implement in order to be granted a third bailout.

Greece owes 10 % of its debt to the IMF and it has already missed two debt repayments, which fell due on June 30 and July 13, becoming the first EU country to do so.

The IMF also deemed the rates forecast for the economic growth of Greece as unrealistically high.

The fund foresees Greek government debt to reach a peak of close...