There’s something about Delia. Who is the new IMF Chief to Greece? (pics + vid) 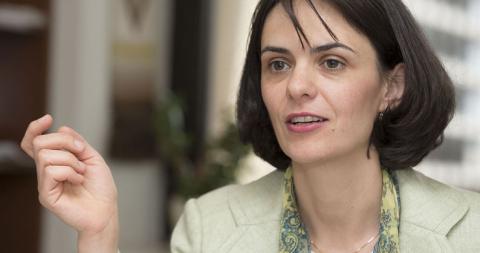 Delia Velculescu has replaced Rishi Goyal as head of the International Monetary Fund (IMF) head representative to Greece. Rumors state that the replacement was due to his rigid and uncompromising behavior during negotiations as well as Velcusescu’s own experience in assessing Greece’s financial affairs.

The tall and lean mission chief first earnt a nickname for herself as “Delia Draculescu” when she headed the IMF team for Cyprus in 2012. Rumors abound as to how she made grown Cypriot men drip with cold sweat and there’s even the story of Cyprus President Nicos Anastasiades flinging a chair at her in a fit of rage though he denies this ever having occured.

In another incident, the Labor Minister of Cyprus told her to go see how her birthplace had ended up along with other Eastern-bloc countries, pointing to “Romanian hookers filling the bars of Cyprus.” Delia reacted calmly, snapping her dossier shut, and walking out of the room accompanied by her entire delegation. Despite her Balkan background, there’s a sense of Anglosaxon conservativeness about her and a wall that stops familiarity in its tracks.

“Such a mysterious and cold smile is one that not even Leonardo da Vinci could have drawn when painting the Mona Lisa,” said a source from the Cyprus Finance Ministry when speaking to Proto Thema about the new lady to head IMF negotiations in Greece. “Those negotiating with her in Greece will have a hard time. She is a dedicated and obstinate woman who won’t change her viewpoint unless you have strong arguments.”

Back in 2012, she had likened Icarus’ father, Daedalus to the IMF. She noted that Icarus had not heeded his father’s advice, while the IMF – in the case of Cyprus – had not done as much as it should to have averted the crisis.

Despite causing heartbreak in Cyprus, her beauty could not go unnoticed in Cyprus. Kostas Velaris, one of a team of lawyers of the Archdiocese of Cyprus, is known to have said after a grueling six-hour meeting with her: “The only positive thing I got out of negotiating with you was your beauty.”

Compliments, however, leave Delia unmoved. Even when she was infuriating, Cypriots were charmed with entire debates about both her mental and physical assets.

On her part, the Draculescu of Cyprus refrained from creating any form of social comaraderie with the locals, keeping all distances and not treading the line from hardened negotiator to human being.

Born in 1975 and raised in Romania, in the shadows of Nicolae Ceausescu, there was not much room for dreaming. Her parents named her after the isle of Delos, near Mykonos, that was a major cult center in the ancient world and the natural meeting-ground for the Delian League – a treasury – created after the Persian Wars in 478 BC.

Surely young Delia Morarou – as she was known then – could not have imagined ever leaving the country that protected members of the Romanian Communist Party’s youth organization of which Velculescu was a part of. Nor could she have known that someday there would be an alignment of her work and the inspiration behind her name.

She studied at Gheorghe Lazar National College in Bucharest before getting her degree from Wilson University in 1997. Somewhere in the middle of her scholarship studies she met Victor Velculescu and decided never to return to Romania. A high achiever like herself, her husband is an Oncology Professor and Co-Director of Cancerl Biology at the John Hopkins University School of Medicine. The couple has three children.

A brunette version of IMF Chief Christine Lagarde, both women have the same polished elegance and instinct of birds of prey.

Romania's COVID-19 case count rises by 8,499; tests performed in past 24 hours: 35,610
Romania issues seven alerts for non-compliant masks imported from China
PLUS's Ciolos on coalition with PNL: Negotiations to give a gov't of equal partners
GeneralElection2020 / Orban: Possible partners for forming parliamentary majority - USR, PMP, UDMR
PM Orban: Gov't committed to make full use of EU financial package made available to Romania for development
Iohannis: It is important that discussions on National Recovery and Resilience Plan go beyond paradigm of electoral populism

Week in Review: Obstacle Courses All Around
Orban: Romania to benefit, 2021 to 2030, from financing of approximately 6 billion euros through Modernization Fund
Romania's COVID-19 case count rises by 9,005; tests performed in the last 24 hours: 36,271
2020 European Researchers' Night - online on Friday