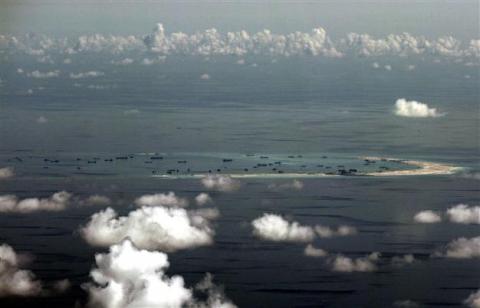 This Monday, May 11, 2015, file photo taken through a glass window of a military plane shows China's alleged on-going reclamation of Mischief Reef in the Spratly Islands in the South China Sea. AP Photo

Chinese Vice Foreign Minister Liu Zhenmin said on August 3 the disputed South China Sea should not be discussed at a meeting of the Association of Southeast Asian Nations (ASEAN).

Liu, speaking to Reuters on the sidelines of the 48th ASEAN Foreign Ministers Meeting, which kicks off in Kuala Lumpur on August 4, said the meetings should avoid all talk on the sensitive issue, adding that countries outside ASEAN should not interfere.

"It should not be discussed," said Liu. "This is not the right forum. This is a forum for promoting cooperation. If the U.S. raises the issue we shall of course object. We hope they will not."

The issue was not on the official agenda, but expectations had been high that it would be discussed against a backdrop of increasing tensions and overlapping claims in the potentially energy-rich South China Sea.

The United States, worried about China's increasing assertiveness in the region, is expected to repeat a call for Beijing to halt land reclamation on islands in disputed waters.

Neither the United States nor China are members of ASEAN, but have been invited to participate alongside other countries outside the group. U.S. Secretary of State John Kerry will be in Kuala Lumpur on August 5 and 6.

China claims most of the South China Sea, through which $5 trillion in ship-borne trade passes every year, and rejects the rival claims of Vietnam, the Philippines, Brunei, Malaysia and Taiwan.

The Asian giant has repeatedly urged Washington not to take sides in the escalating maritime dispute over the area, where it last year stepped up construction of artificial islands, provoking U.S. criticism and alarming neighbours.

Turkey stops all flights from China as part of coronavirus measures
Romanian national asks for repatriation from Wuhan, China