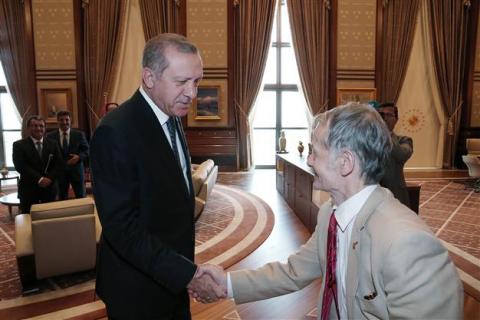 Ukraine has stepped up to establish a troop of Muslims, leader of Crimean Tatars, Mustafa Abdülcemil K?r?mo?lu, said on Aug. 3.

The troops will be deployed in the Kherson region on the Crimean border and would monitor transportation of goods and people between Ukraine and the peninsula, he said speaking at a congress.

K?r?mo?lu met with President Recep Tayyip Erdo?an met after attending the 2nd World Crimean Congress, which convened in Ankara July 31-Aug. 2 with the participation of 180 civil society organizations from 12 countries, along with politicians.

An autonomous Crimean Tatar Republic will be formed, K?r?mo?lu said, calling on the Crimean people to take an active role in Ukrainian politics. He expressed expectation from the diaspora on this bid.

Ukraine has halted train services to Crimea after Russia's annexation of the peninsula, instead directing services to Novooleksiyvka and Kherson. Turkish Airlines also added an additional flight to Kherson after the annexation.