Yannis Varoufakis and his prefabricated past: Truth or lies? 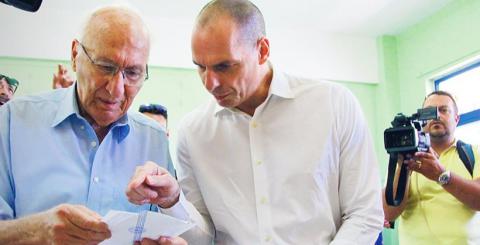 Greece’s former finance minister Yanis Varoufakis can be accused of a lot of things from a narcissist with bad fashion sense to a failed negotiator, but nobody can deny his narrative skills. Through scattered fragments here and there with a dash of spice, his selective memories are emerging like something of a pop psychodrama.

Here are some things we know:

* In an interview with Stern he said his father was imprisoned in a penal camp for four years at the time of the Greek civil war (1946-1949) where he was brutally tortured. “The reason? He had refused to denounce communists. he was a liberal, educated in the spirit of the French Revolution.” Meanwhile, one of Varoufakis’ uncles was sentenced to death. His mother, Eleni Varoufakis, after World War II became “a member of a right-wing terrorist organization. She hated all the left.” Her duty was to spy on Varoufakis’ dad. That’s how they met.

* In the same interview with Stern he revealed that he had a close relationship with Germany with his family vacationing in Germany and Austria during the seven-year junta rule. He began to learn German at the age of three and secretly listened to broadcasts of Deutsche Welle under the blanket with his parents.

* In an interview with talk show host in 2011 with Petros Kostopoulos he said that before becoming a lecturer in England, he set up socialist youth organization with 17N terrorist Dimitris Koufondinas – who was 7 years older than him in 1975, meaning that Varoufakis must have been around 14 years of age when this occured.

* Apart from Marxism and bikie fetishes, Varoufakis claims to have been a rocker. Infact he states that he was once a member of the support group for the Greek band Socrates Drank the Conium when he was at high school. At the time of the bankd getting together Varoufakis was just 10 years of age and studying at Moraitis School at Psyhiko, meaning he must have been in primary school when he played at Fliskos, the bar where the group were performing at the time.

* On his blog he writes about how his weekly program on Australian’s state channel:
efore reading on, I should tell you that the undersigned was purged from Australian state radio (SBS-Radio) on a charge of ‘antisemitic’, on-air, commentary. The formal complaint was tabled by an organisation called ICJS Research (Issues of Concern for Justice & Society) that was formed, according to its website, in order “to express the concerns of Australian citizens about a broad range of issues such as terrorism, appeasement, tolerance, war and justice in society.” The specific charge against me was (a) a claim that Israel used the blockade of Gaza as part of “a strategy for retaining a large part of the West Bank” and (b) my reference to the ‘security barrier’ as a “concrete monster”. The fact that my comments were supported by reports in the Israeli newspaper Ha’aretz was not deemed a sufficient defence against the charge of antisemitism. Once the decision to terminate my weekly radio broadcast, after sixteen years of broadcasting, was reached, this is how the station’s representative explained it in a letter to the plaintiff: “The particular anti-Israeli line of his commentary could be reasonably held to have assisted in the promotion of negative stereotypes about Jews, and more particularly, Israeli Jews.” And this is how the Australian Jewish News summed up the outcome: “It is the first acknowledgment by SBS that portraying Israel in a bad light is the same as negative stereotyping of blacks or women, that it does harm to people.”

* His wife, installation artist Danae Stratou, inspired Pulp’s 1995 hit “Common People”. Jarvis Cocker never did reveal the name of the rich girl from Greece who had moved to London to live “like the common people.”