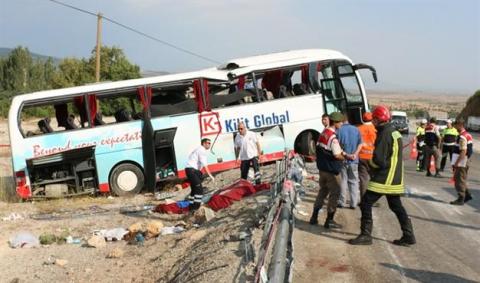 At least four people were killed after a bus carrying Russian-speaking tourists rolled over in southern Turkey on Aug. 6.

Do?an News Agency reported that the bus, carrying Russian, Ukrainian, Belarussian and Kazakh tourists, was going from Pamukkale in the province of Denizli to the popular southern resort of Antalya.

38 injured people were transferred to hospitals, the report added, as police launched an investigation into the accident.

"I was driving my car right behind the bus. It suddenly switched the lane and rolled over," eyewitness Mustafa Sar?ca told the agency, adding that the road was slippery due to rain.

The identities of the casualties were not immediately released.

Leaders of the six opposition parties meet for coalition protocol

Tsitsipas says Kyrgios has ‘evil side’ after fiery clash