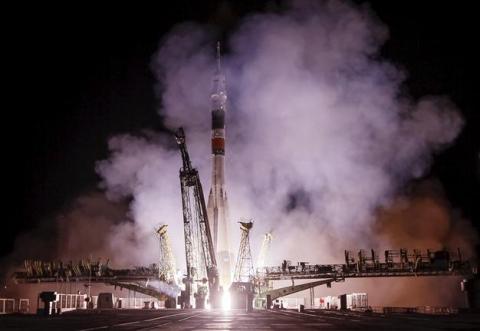 The Soyuz TMA-17M spacecraft carrying the International Space Station (ISS) crew of Kjell Lindgren of the U.S., Oleg Kononenko of Russia and Kimiya Yui of Japan blasts off from the launch pad at the Baikonur cosmodrome, Kazakhstan, July 23, 2015. Reuters Photo

NASA has extended a contract with Russia's space agency for $490 million to carry US astronauts to the International Space Station amid a lack of Congressional funding, the US agency said on August 5.

The United States will continue to rely exclusively on Russia to take astronauts to the orbiting outpost under the new contract, which runs until 2019, even as relations between the two countries have reached their lowest point since the Cold War.

The United States has been dependent on Russia for ISS access since it ended its space shuttle program in July 2012.

NASA said a lack of funding for development of private vessels by US companies Boeing and SpaceX over the last five years has left NASA with no other option.

As a result, the United States will pay for use of space vessels belonging to the Russian Federal Space Agency (Roscosmos), even as Washington imposes harsh economic sanctions on Russia over its suspected support of separatists fighting Kiev forces in eastern Ukraine.

NASA Administrator Charles Bolden warned Congress in a letter Wednesday that Boeing and SpaceX may not be ready by the end of 2017 to carry out a plan to send up their first manned vessels if funding requested by President Barack Obama is not granted in the 2016 budget.

The program requires $1.24 billion to reach its goals, Bolden said.

"The fastest path to bringing these new systems online, launching from America, and ending our sole reliance on Russia is fully funding NASA's Commercial Crew Program in FY 2016," Bolden wrote.

The Republican majority in the House of Representatives and Senate have proposed reducing that sum by $250 million and $300 million respectively.