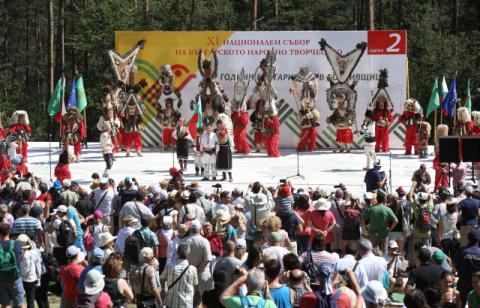 Photo by Bulgarian News Agency (photos below by BGNES)

As many as 40 000 people gathered in Koprivshtitsa for the opening day a traditional festival which is being held in the picturesque town for the eleventh time.

Some 12 000 people from Bulgaria and other countries are taking part in the spectacular events which include much dancing, much singing, handicraft, storytelling, and, of course, some food.

Songs from across Bulgaria were performed before a crowd of Bulgarian and foreign visitors and politicians, some of whom came dressed in traditional garments.

The Kukeri, masked men who every year roam around the streets of towns, cities and villages to chase away evil winter spirits, were also part of the celebrations.

UNESCO Director-General Irina Bokova, under whose auspices the festival is being held, also attended.

"As a Bulgarian, I would like this [festival] to be passed on to the next generations, since it is a moral, beautiful, historic guideline," 24 Chasa daily quoted her as saying.

"There is no greater magic than the magic of folk art, than these incredible voices and melodies, than what the hands of Bulgarian women created throughout the decades."

Among the special guests (and performers at the opening) were also the Bistrishki Babi ("Bistritsa Grannies") - an ensemble of dancing and singing ladies who in 2005 were added to UNESCO's intangible cultural heritage list.

This year Koprivshtitsa is also marking the 50th anniversary since it first hosted the event.

The Koprivshtitsa Folk Festival is running from to Friday to Sunday. Its full program is available here in Bulgarian and here [as a PDF file] in English.

Even more visitors are expected on Saturday - double the numbers of Friday - and...