FBI to assist in probe of Texas football player's death 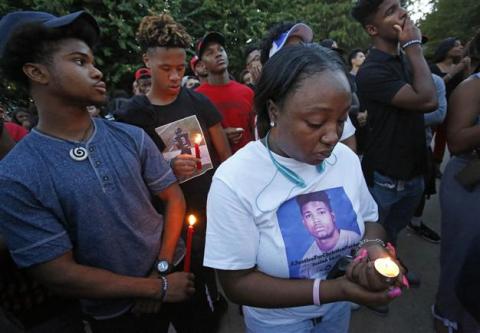 The FBI will participate in the investigation into the death of an unarmed black Texas college football player who was fatally shot by a white officer during a burglary call at a car dealership, a suburban Dallas police chief said on August 8.

During a news conference on August 8 night, Arlington Police Chief Will Johnson said a special FBI agent in charge of the Dallas field office would take part in the probe. He stressed it "in no way diminishes my confidence" in local officers to conduct the investigation.

Arlington officer Brad Miller was placed on administrative leave after the early August 7 shooting of 19-year-old Christian Taylor. Police say the officer had never before fired his weapon in the line of duty.

Taylor was shot two days before the anniversary of the shooting of Michael Brown in Ferguson, Missouri, an unarmed, black 18-year-old whose death galvanized the "Black Lives Matter" movement and sparked protests that at times turned violent.

Johnson mentioned the current climate during the news conference, noting that "our nation has been wrestling with the topics of social injustice, inequities, racism and police misconduct" and that his department would "pledge to act in a transparent manner."

Some of the nationwide criticism of police use of force in the last year has happened online, and Taylor's death resonated on social media, with some posts questioning the official account and calling for video to be released.

Johnson said Miller and another officer found Taylor "freely roaming" inside the dealership when they arrived.

After Taylor tried to escape from another side of the building, the other officer used his Taser and Miller fired four rounds with...