Fikret Otyam laid to rest after a ceremony 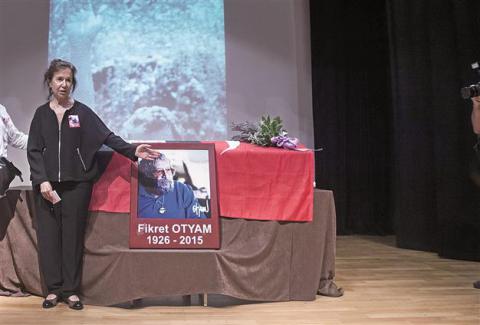 A ceremony was held yesterday at the Ankara Contemporary Arts Center for famous painter, journalist and author Fikret Otyam, who died on Aug. 9 at the age of 89 in the southern province of Antalya.

The ceremony began with a moment of silence and continued with a speech delivered by Republican People's Party (CHP) leader Kemal K?l?çdaro?lu.

Stating he was pleased and proud of Otyam's friendship and brotherhood, K?l?çdaro?lu said his stories of eastern and southeastern Anatolia were a source of information for everyone, adding, "When his pen fell short, he used to hold on his pallet and brush. He tried to portray what he had seen and lived as well as trying to explain in written language. He properly succeeded [at] it."

He said he had known Otyam since his high school years, and added, "He had been a diabetic patient for 40 years and had renal problems for more than 30 years, but he never lost his energy for life. My late father used to read daily Cumhuriyet. He knew Anatolia and Anatolian people thanks to his interviews. We have learned a lot from him. We were last together at a meeting of a foundation. It is big pain for me to lose him."

Otyam's daughter, former Anadolu Agency Deputy Director Elvan Baransel, said her father was one of the rare people who were appreciated when they were alive.

"You lost an author, painter and a friend you loved; we lost a husband, uncle and grandfather. From now one we will survive his name as his family," she said.