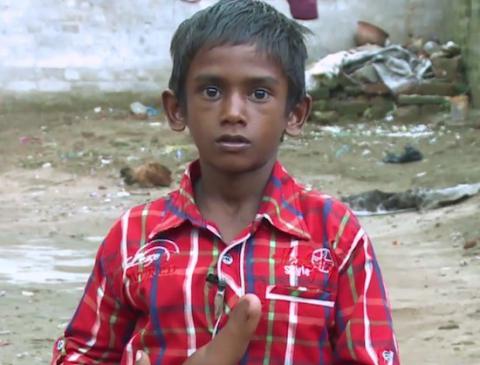 The sad and touching story of a 9-year old boy from India, who suffers from a rare case of gigantism is making news around the world. Mohammad Kaleem lives with his parents in Jharkhand, one of the poorest provinces in India and he is shunned by his community. He is not allowed to attend the classes in the primary school, as his father Shamim was told by the school administration that the other children were scared of his huge hands. Besides the medical problem of their child, the superstitious reactions of the backward society they live in might the worst problem they deal with.  They call him ‘the devil’s child’. Kaleem’s whole family has been cast aside. “There is no cure for the boy. He is the child of the devil”, says one of his uncles. But in their despair a glimmer of hope appeared in the form of Dr. Raja Sabapathy, who is a specialist micro-surgeon in cases of gigantism. Dr. Sbapathy believes his condition is curable and he is scheduling an 8-hour operation. After the first surgery Kaleem will be submitted to numerous follow up operations, but the doctor says he will live a normal life.

Johnson: Dealing with Putin is like a Crocodile Biting your Leg

India with a new delivery of S-400 from Russia