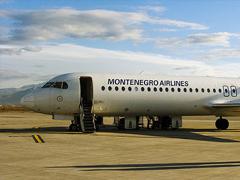 The debts of Montenegro Airlines currently amount to 74 million euro and are lower since the arrival of the new management, said the head of the Board of Directors, Daliborka Pejovic, adding that the company has no fear of bankruptcy.

She explained that the company had come up with two measures to "fight the fires" - renting the planes of the fleet and reprogramming the loans for which the government had provided bank guarantees.

"Those measures are already at the final decision stage and will need the approval of the government and some good business arrangement," Pejovic told a press conference.

She said that in the last two years, the company had paid off 5 millon euro in loans and 5.9 million euro owed to customs.

The number of employees had been cut from 454 to 398 since July 2013. Pejovic announced that after the summer season, the company would sack another 23 workers to meet the requirements of the government's programme on restructuring the company.

The airline's 2014 financial report showed that Montenegro Airlines has become the least profitable airline in the former Yugoslavia after recording the 9 million euro debt last year.

Continuing the practice of covering the debts of troubled state companies, Montenegro's government took over 3.7 million euro of the airline's debts last...