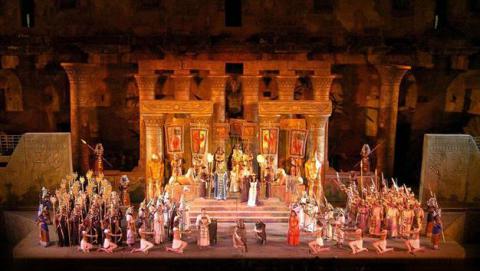 Antalya?s ancient Aspendos Theater will host four events in September and October. But civil engineers are worried about a sound system that may damage the theater The ancient theater of Aspendos, which was closed to art events in 2008 to prevent damage, was recently reopened after a restoration process.

The theater will host the award ceremony of the 52nd Antalya Golden Orange Film Festival in October, with 110-decibel sound system amplifiers being placed in the theater. However, Antalya Branch Chairman of the Civil Engineers Chamber Cem O?uz has said that a 115-decibel sound system would create an earthquake effect and cause cracks, adding ?Events here should not be more than 80-90 decibels.?

Following the decision of the Directorate of Surveying and Monuments in 2007 to limit the number of visitors and start an urgent restoration process, the Aspendos Theater was closed to events except the Culture and Tourism Ministry?s organizations. It has been reopened for art events and gala dinners.

?It is nice that Aspendos will host art events but we should remember that we must protect these structures. Even though it underwent restoration, 115 decibels is a critical level for Aspendos. [Sound in the theater] should not be above 80-90 decibels,? O?uz said.

He said the city?s newly established stadium could also be used for the opening and closing event of the film festival. Stating that the tie between the city?s residents and the festival was questioned every festival time, O?uz said, ?The new stadium has a...