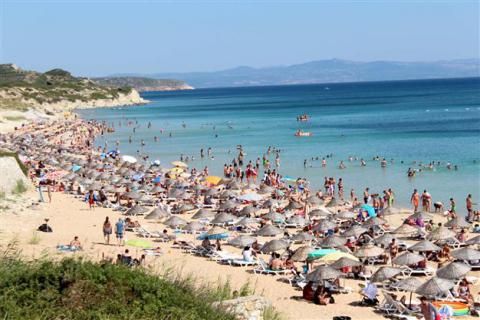 As the number of tourists visiting Turkey this summer has seen a sharp drop, Republican People's Party (CHP) deputy Çetin Osman Budak has filed a written question to Prime Minister Ahmet Davuto?lu about whether the decrease is due to political and security concerns, and enquiring whether measures will be taken to support the sector amid the drop.

Budak, a deputy from the Mediterranean resort of Antalya, underlined that there had been a sharp decrease in the number of foreign tourists visiting Turkey this year mainly from Germany and Russia.

"Many countries have issued warnings for their own citizens to be 'careful' about their travels into Turkey ? These countries have recommended not visiting the places near Turkey's border with Iraq and Syria. Such warnings will negatively affect the tourist inflow to Antalya. The resort has already lost around 500,000 Russian tourists in the first six months of the year from the same period of 2014 and cannot endure further losses. Tourism representatives are deeply concerned about their potential losses in 2016 too," he added.

Budak asked whether the government had replied to any of the warnings and whether any measures were planned to halt a further drop.

"Is there any reason behind the inability of the government to offer incentives to tourism sector representatives, although promises were given months ago?" he asked.

Turkey's tourism income decreased by 13.8 percent in the second quarter of the year, down by $7.73 billion compared to the same period of the previous year, according to data from the Turkish Statistics Institute (TÜ?K).

Rising security concerns over the possibility of Islamic State of Iraq and the Levant (ISIL) attacks, as well as geopolitical risks like...