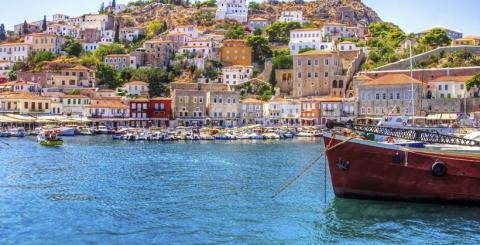 Police are searching for a pair of Georgian nationals that allegedly fled the posh isle of Hydra with roughly 40,000 euros taken from a slain 67-year-old local restaurant.

Another seven Georgian nationals were arrested in relation to the murder of the man, who was asphyxiated during a robbery of his home. His 57-year-old wife was also held in the pair’s residence during a home invasion.

Four of the seven arrested suspects were picked up as they tried to take sea taxis for departure off the island, the same method used by the two suspects that fled for the upscale Athens seaside resort of Varkiza.

Authorities said DNA evidence has been found in the home of victim Manolis Economou linking some of the suspects. Five out of the seven foreign nationals (believed to reside in Greece as migrants, not tourists) have criminal records for petty offences, reports state.

The victim, in a photograph taken in his restaurant’s kitchen: