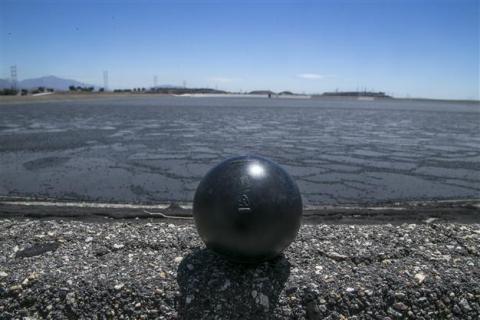 A grapefruit-sized plastic ball could help answer Turkey?s water shortage problems, according to a Turkish businessman producing an innovative solution.

Turkey has suffered a water shortage for the past six years, as around 25 percent of water held in open reservoirs evaporates in the summer heat.

Last year, Ankara-based entrepreneur Erkan Koca began producing ?shade balls? which, when floated on the surface of reservoirs, protects the water underneath from the sun.

His efforts to persuade Turkey?s water companies of the ball?s benefits have fallen on deaf ears, but after Los Angeles began using similar balls produced by a U.S. manufacturer, Koca hopes they will take more notice.

?They can be used to fight against drought in reservoirs because in the summer, almost 25 percent of reservoir water evaporates,? Koca told Anadolu Agency.

?But when a shade ball is used, much of the sunlight is prevented from hitting the water, chemical reactions are halted and evaporation is cut down,? he said.

The grey-colored balls are made of hard plastic and partly filled with water. When the sun?s rays hit the balls as they float on the surface, the water within the balls absorbs the heat, protecting the valuable water reserves below.

Los Angeles became the first city in the U.S. to use shade balls. The Los Angeles Department of Water and Power hopes to conserve around 300 million gallons of water a year by using shade balls, which prevent up to 90 percent of evaporation.

Koca?s company, F?rat Kauçuk, is one of the three in the world currently manufacturing the balls.

As well as conserving water from...