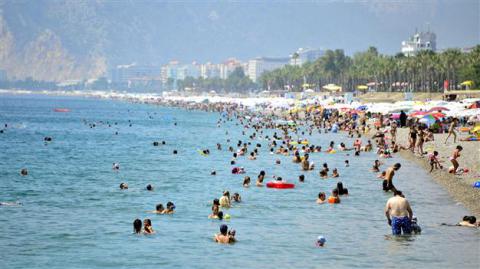 More than 500,000 fewer Russians visited Turkey in the first seven months of 2015 in comparison to the same period the year previously, tourism representatives have said, noting the greatest drop-off was seen in the southern hotspot of Antalya.

In Antalya, the trajectory of the tourism industry has been raising concerns, due to the ruble's devaluation. At the same time, increased militancy and security alerts across Turkey, along with the tarnished image of the country in Europe, have caused a significant fall in tourist numbers.

In the first seven months of the year, the number of Russian tourists to Turkey dropped from around 2 million to 1.4 million year-on-year. However, the number of German visitors rose between January and July by 1.9 percent to 2.1 million, according to the Touristic Hoteliers Association of the Mediterranean (AKTOB).

According to data released by the Antalya Provincial Directorate of the Culture and Tourism Ministry, around 7.2 million total visitors have landed at Antalya and Gazipa?a airports to Aug. 15, a 6 percent fall over the same period in 2014.

The report shows that the leading tourism markets of western, northern and central European countries have faced stagnation and regression in the period.

Tourist numbers to Istanbul, meanwhile, rose 8.3 percent over the first seven months. On the contrary, the Aegean resort provinces of Mu?la and ?zmir saw a fall of 6.1 percent to 1.5 million visitors in Mu?la and 9.9 percent to 643,000 visitors in ?zmir.

There were also falls in the Scandinavian market, excluding Finland, along with key markets such as the United Kingdom, France, the Netherlands and Austria. The relapse also hit African, West Asian and former Soviet countries, with Israeli...