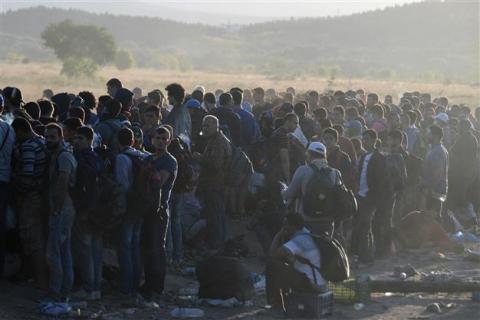 A record 107,500 migrants crossed the European Union's borders last month, according to new figures Aug. 18, showing they are arriving in dramatically increasing numbers and creating a humanitarian crisis for the 28-nation bloc.

During the first seven months of the year, there were nearly 340,000 migrants, up from 123,500 during the same period last year, Frontex said.

"This is an emergency situation for Europe that requires all EU member states to step in to support the national authorities who are taking on a massive number of migrants at its borders," Frontex director Fabrice Leggeri said in a statement.

Germany alone expects as many as 750,000 refugees to seek asylum there this year, according to media reports.

The UN refugee agency said in the last week alone, 20,843 migrants -- virtually all of them fleeing war and persecution in Syria, Afghanistan and Iraq -- arrived in Greece, which has seen around 160,000 migrants land on its shores since January, according to the UN refugee agency.

"The pace of arrivals has been steadily increasing in recent weeks," UNHCR spokesman William Spindler told reporters in Geneva.

But the wave of migrants has impacted Europe from its southern islands to the northern countries.

Germany, as Europe's economic powerhouse, has become the refugees' top destination, with one in three who arrived in the EU last year seeking asylum there.

According to a report in the Handelsblatt newspaper, Berlin expects up to three-quarters of a million to apply for asylum in 2015.