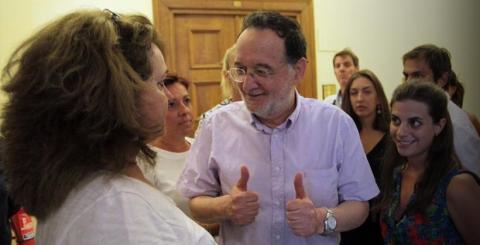 Supporters of the far-left “Left Platform”, the anti-memorandum and virulently anti-capitalist grouping within ruling SYRIZA up until recently, will reportedly launch a new party with the initials “EAM”.

If true, the acronym harks back to the occupation-era “National Liberation Front”, the biggest anti-Axis resistance force during WWII in Greece, whose main component was the Communist Party of Greece (KKE). The previous EAM stood for “Ethniko Apeleftherotiko Metopo” in Greek, while the latest version translates into “Unified Anti-Memorandum Front”.

The decision was taken by ex minister and the chief exponent of the “Left Platform”, Panagiotis Lafazanis, while it remains to be seen which other high-profile SYRIZA cadres will follow the more radical version of radical SYRIZA.