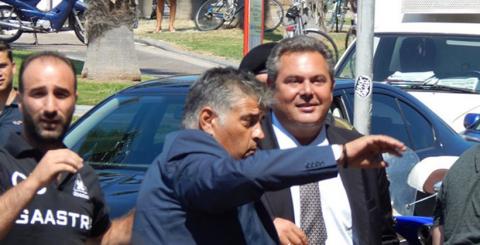 Combative Defence Minister Panos Kammenos, the leader of the rightist junior party in the current moribund Greek government coalition, was met by angry local residents on the eastern Aegean island of Kos, with several hurling … eggs, bottles and verbal abusse his way!
The incident occurred on Friday as the usually tough-talking Kammenos arrived on the island amid the unprecedented wave of refugees and illegal migrants disembarking from the opposite Turkish coast for whatever Greek territory they can reach. The leader of the small, formerly anti-bailout party had arrived to “survey the situation” on the island — one of the primary targets of migrant smugglers ferrying third country nationals into Greece.
Kammenos, a former member of conservative New Democracy party since his teen years with repeated tenures in parliament and various ministerial positions, attracted the brunt of criticism during his visit, given that under his watch as defence minister Greece’s sea borders in the eastern Aegean have essentially been abolished.
No real “survey” of the situation was possible, as Kammenos retreated into a government building with his entourage and security detail amid the missile being tossed in his direction.