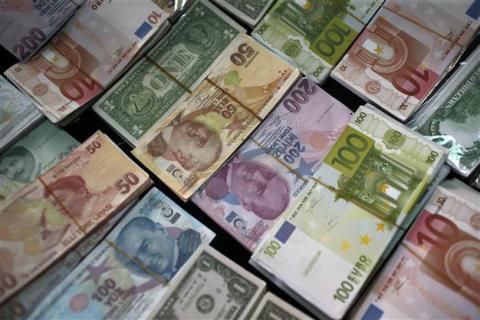 In this Monday, June 8, 2015 file photo, Turkish Liras, Euros and U.S. Dollars are stacked at a currency exchange office in Istanbul, Turkey. In emerging markets worldwide, currencies are plunging over fears that developing economies are on the verge of a crippling fall. AP Photo

The world's emerging economies are allowing their currencies to slide in a quest to remain competitive, following China's devaluation of the yuan and the dollar's strength in anticipation of US rate hikes.

The currencies of emerging nations in Asia have especially suffered in recent weeks from market speculation that the US Federal Reserve will lift interest rates this year -- possibly as soon as September.

According to Societe Generale analyst Kit Juckes, those countries "fear a resumption of significant capital outflows if the Fed does raise rates next month, as well as fear of further (yuan) weakness and concern about the sluggish pace of global growth" -- all of which are strengthening the dollar, euro and yen.

Other factors, including slumping prices of oil and natural gas -- exports that many emerging economies rely on heavily -- are also pulling currencies lower or prompting governments to let their value drop.

On Aug. 20, Kazakhstan decided to cease intervention to support the Central Asian nation's tenge currency, and allowed it to float freely to cope with the plunging price of oil -- its primary export.

The result was an historic 23 percent drop in value to 257 tenge to the dollar.

"The government and central bank decided to let (the tenge) free float in order to compete with the declining currencies of its two biggest trading partners; Russia and China," explains Lawler.

This month's surprise devaluations of the Chinese yuan -- also known as the renminbi -- by the country's central bank was similarly...