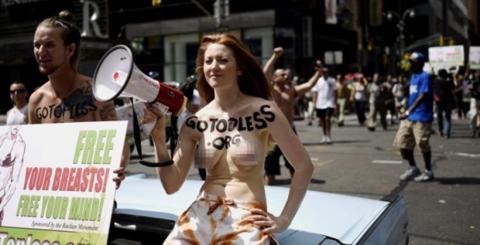 Why can a man go shirtless in a city park during a hot summer afternoon or on the concrete basketball court in a pickup game between “skins” and “shirts” and a woman … cant?
That’s a question on the minds on several NYC protesters who joined people in 60 cities around the world Sunday to celebrate GoTopless Day — although it was Manhattan’s march had a strong element of activism alongside its showing of skin, according to AP.

The parade’s route down Broadway to Times Square retained its own symbolism, as city officials are quite open with their disdain of the topless tip-seekers at the “Crossroads of the World,” the AP said — despite lack of a top for women being legal in “Gotham” since 1992.

Yet for otherwise liberal-minded NYC Mayor Bill de Blasio and police Commissioner Bill Bratton the body-painted women in Times Square who pose for photos with tourists are a “nuisance.”
GoTopless spokesperson Rachel Jessee was unapologetic, however, saying the rally isn’t sexualizing the matter, as the goal is for gender equality when it comes to revealing one’s chest.

Theresa Crudo, 22, of the Bronx, brought along her 15-month-old son as she marched bare-chested. “Boobs are natural, you know?” she told the AP. “I wanted to show that you can breast feed in public and do what you have to do for your child.”