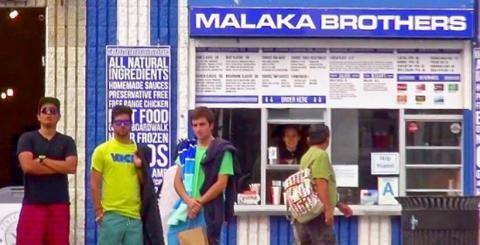 No, it’s not a practical joke and it’s not a “shock advertisement”, it’s an actual an popular gyro shop operating on the Venice, California boardwalk named none other than “Malaka Brothers”!
No need to turn to Google translate, “malakas” is the internationally known Greek word meaning “wanker”, but with connotations differing depending on the tone and context used, as reported by Greekreporter.com.
The site reports that group of Greek-Americans opened the “Grecian” fast food outlet opened to serve “the freshest and best Gyro in the LA area.”
Here’s the reason one man, identified as manager Guy Puglia, gives for the name:

No pork gyro, hmm? It’s the mainstay in Greece.

US Embassy and gov’t offices to remain closed on Thursday