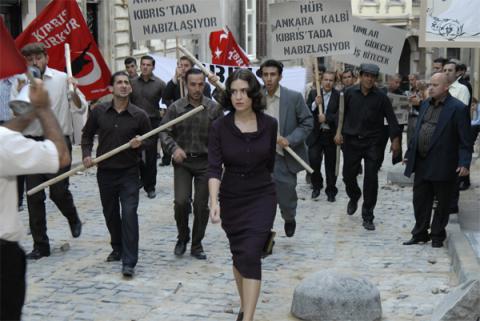 The Istanbul pogrom, known in Greece as Septembriana, took place on September 6-7, 1955. Anti-Greek riots were orchestrated by the Tactical Mobilization Group, the Counter-Guerrilla and the National Secuρity Service. Mobs took the streets attacking Istanbul’s Greek minority (known as Rums) after the false news that the Turkish consulate in Thessaloniki, the house where Mustafa Kemal Ataturk was born had been bombed.

The report may have been trumped up, but the raids, rapes and bloodshed were real. Much of the Turkish mob, numbering 300,000 people, had been trucked into the city specifically to attack the Greek community, but Armenians were also hurt. The police remained ineffective as people chanted anti-Greek slogans, turning violent on Greeks.

Frightened, many Greeks tried to hide within the crowd. Those who were discovered had their pants pulled down and were forcibly circumcised. Women were raped. In just one night 4,350 Greek stores were destroyed, 2,600 Christian homes were plundered, 73 churches, 26 Greek schools, 110 Greek restaurants, 21 Greek factories, 27 Greek pharmacies and 3 Greek newspapers were broken into and vandalized… Greek cemeteries were attacked with bones dug up and thrown around.

Silence followed the incidents for decades as if not talking about injustice could possibly wipe it away… as though it never happened. These days, young Turks walk past Greek churches in Taksim and Kadikoy unaware that a pulsating Greek community once worshipped there. The grandchildren of the very mob that ravaged and looted now peacefully sit at the cafes that had been plundered, oblivious to the fact that Mohammed who serves them Turkish coffee was once actually Yiorgos.

Decades on, a movie called Guz Sancisi was screened to public surprise and was rendered a success… casting the spotlight on the tragedy but filtered through the Turkish lense.

Deja vu 2009… Did Turkey learn from the events of 1955? Decades on and Greek cemeteries are still being desecrated.