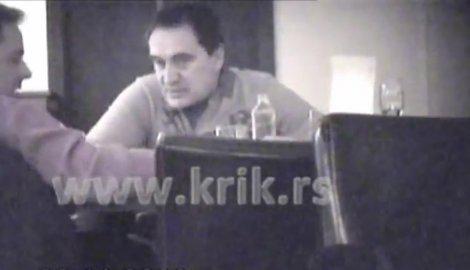 Recordings showing meetings of Radoslav Radulovic with people from the Interior Ministry in 2008 and 2009 have been published on the website KRIK.

The footage shows former Minister of Interior Ivica Dacic, people from the top of his cabinet Branko Lazarevic and Vanja Vukic, as well as his security adviser Ivica Toncev.

The website KRIK was founded by a team of journalists engaged for years in exposing crime and corruption, and have received numerous awards for their work.

Rodoljub Radulovic, better known to the public as Misa Banana or Misa Amerika, is currently on the run. He has been marked as a close associate of Darko Saric, who was sentenced to 20 years in prison for smuggling 5.7 tons of cocaine.

Radulovic was sentenced to 12 years and six months in prison during the same trial.

The recordings were made in the period from November 29, 2008 to April 7, 2009. According to KRIK Radulovic during this period met with people from the top of the MUP nine times.

The disclosure of the footage represents new details in a case that threatened to bring down the government of then Prime Minister and Interior Minister Ivica Dacic in early 2013.

The acquaintance of Dacic with Radulovic is mentioned in the context of the trial of former chief of the cabinet of the minister of...