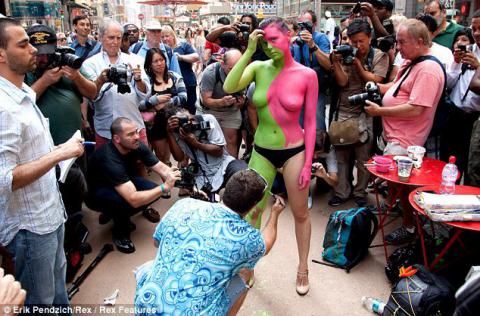 The fashion of people painting themselves and walking nude in broad daylight turned awry for a woman who some people thought bore too much flesh in Times Squarae. Police were called when the “painted lady” was attacked. A female assailant called her a “nasty whore” and punched her as bemused tourists looked on.

Both the topless woman, Amanda Roman, and her attacker, Angela Portalatin, were handcuffed and led off.

New York City Mayor Bill de Blasio is considering removing painted ladies away from the square altogether. He said: “As a human being and a parent, I don’t think it’s appropriate, in the middle of one of the busiest squares in New York City, that women should display themselves that way.”