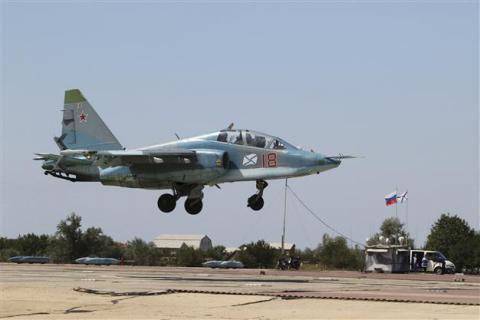 A Russian Sukhoi Su-25 jet fighter flies during a drill at the Nitka training complex in the village of Novofedorovka, west of the Crimean city of Simferopol, August 27, 2015. Pilots of the Russian Navy's Northern Fleet's deck-based aviation are taking part in a military exercise in Crimea. Reuters Photo

Russia on Sept.14 launched its largest military exercises of the year, Centre-2015, involving some 95,000 soldiers including ground troops, navy and airforce units.

The long-announced war games are "the most large-scale drill of 2015," the defence ministry said.

Russia has recently intensified snap checks of its military might, testing its capabilities from the Arctic to the Far East as relations with the West have plunged to a post-Cold War low over the Ukraine crisis.

Centre-2015 takes place at 20 sites across Russia's central military district, which reaches from the Volga River to the Ural mountains and Siberia in the east, while also including far northern Russia.

Troops from member states of the Russia-led Collective Security Treaty Organisation (CSTO), made up of several ex-Soviet countries, are also involved in the exercise.

The defence ministry said the war games are aimed at testing the readiness of the military of the CSTO countries to "manage coalition groups of troops in containing an international armed conflict."

The drill begins as leaders are to arrive in Tajikistan for a summit of the CSTO that starts on Sept.15.

The exercises running to September 20 include 20 naval ships and up to 170 aircraft, the defence ministry said.

President Vladimir Putin will observe the drills during one of the days, Russian daily Izvestia reported last week, without giving details.

The main action will take place in the Urals, in the Siberian Altai region and in the southern Astrakhan region and the Caspian Sea, the commander of...