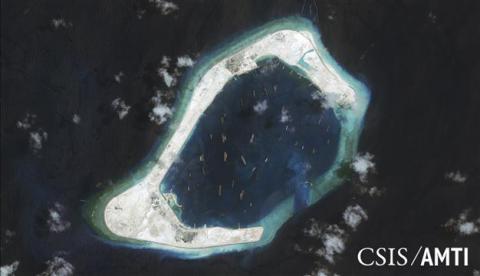 Beijing may be building its third airstrip on artificial islands in the South China Sea, a US think-tank said, in a move likely to raise tensions with Washington ahead of a state visit by China's president.

China claims almost the whole of the sea and over the past year has asserted its stance with rapid conversion of tiny reefs into islands for facilities with military uses.

Taiwan, Vietnam, the Philippines, Malaysia and Brunei all have rival claims to the waters, which incorporate strategically crucial shipping lanes and could harbour oil and gas deposits.

The Pentagon has warned that Beijing's activities are changing the regional status quo, and has weighed sending warships and surveillance aircraft within 12 nautical miles -- the normal territorial zone around natural land -- of the new artificial islands.

Work began last year on a 3,000-metre (9,842 feet) runway on Fiery Cross reef in the Spratly islands, around 1,000 kilometres from China's island province of Hainan.

It is now "well advanced" and has reached the painting stage, said the Washington-based Center for Strategic and International Studies (CSIS) on Sept.15.

Satellite photos of another reef, Subi, where nearly four million square metres (988 acres) of land have been reclaimed, show grading work and possible runway construction is being carried out, it said.

And satellite photos taken last week show that a retaining wall has been built on Mischief Reef, creating a 3,000-metre rectangular area, and a cement plant set up, CSIS said, "suggesting another runway could be in the works".

The images appear to contradict a claim by China in August that its reclamation activities had stopped.