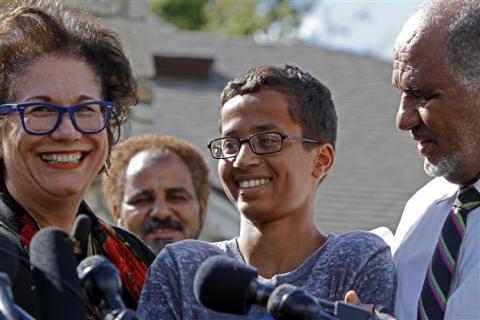 A Muslim teenager arrested after a Texas teacher mistook his homemade clock for a bomb won invitations to the White House, Google and Facebook on Sept.16 in a surge of public support.

President Barack Obama congratulated Ahmed Mohamed, 14, on his skills in a pointed rebuke to school and police officials -- who defended his arrest -- amid accusations of Islamophobia.

"Cool clock, Ahmed. Want to bring it to the White House? We should inspire more kids like you to like science. It's what makes America great," Obama tweeted.

A photo of Mohamed standing in handcuffs while wearing a t-shirt with the US space agency NASA's logo was retweeted thousands of times in a matter of hours and "#IStandWithAhmed" became the top trending hashtag on Twitter.

Mohamed told the Dallas Morning News he hoped to impress teachers by bringing the clock to school on Monday.

"My hobby is to invent stuff," the teen said in a video posted on the paper's website, filmed in his electronics-filled bedroom.

"I made a clock. It was really easy. I wanted to show something small at first... they took it wrong so I was arrested for a hoax bomb."

The son of Sudanese immigrants who live in a Dallas suburb, Mohamed loved robotics club in middle school and was hoping to find something similar at MacArthur High School. He did not get the reaction he hoped for when he showed the clock to his engineering teacher.

"He was like, 'That's really nice,'" Mohamed said. "'I would advise you not to show any other teachers.'"

When the clock's alarm went off in another class, the teacher told him it looked like a bomb and confiscated it. The school called police and Mohamed was taken away in cuffs amid...