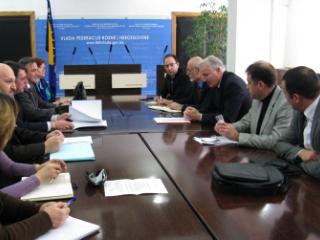 The head of the Privatization Agency in Bosnia's Federation entity, Suhret Fazlic, has resigned in a disagreement over the government's decision to form a private company that would assume some of the agency's responsibilities.

"This was an illegal decision," Fazlic said on Tuesday. "I believe this decision will make the process of returning public property more complicated and slower."

The dispute over the Intera Company has fuelled political tensions in the Federation in the past few weeks. Opposition parties have complained that the Federation government decided to form the company at the end of August but announced it only last week after the media started writing about it.

But some opposition parties expressed concerns that this might be a prelude for further misuse of public funds.

"Suhret Fazlic resigns, does not want to participate in the murky business of government's Intera company," the opposition Social Democratic Party, SDP, said on its web site.

Some government officials told BIRN that the resignation also had a political background to it claiming that Fazlic, as an SDP member who was appointed when the Federation government was led by the SDP, wanted to weaken the current government led by the mainly Bosniak Party of Democratic Action, SDA.

The leaders of SDA and the main...