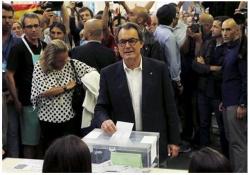 Parties backing the breakaway of Catalonia from Spain have secured a majority in the province's regional Parliament at the elections held Sunday, results show.

A clear majority of 72 seats (in a regional parliament of 135 seats) will be controlled by parties backing a move by Catalonia to break away from Spain by the beginning of 2017.

Junts per Si, an alliance formed before the vote that is projected to have got the most (62) seats, promised to declare independence unilaterally or sit together with the Madrid government to discuss the situation.

Another pro-independence party, left-wing CUP (Candidatura d'Unitat Popular), has mustered over 8% of the vote which translates into 10 seats.

The Junts per Si ("Together for Yes") camp was composed by the Convergencia i Uniò (CiU) party of Catalan President Artur Mas and Esquerra Republicana (ERC), also a pro-independence entity which however had previously failed to achieve unity with Mas on a number of issues.

Spain's government says there is "no sense" in plans of Catalonia to secede and calls on politicians and citizens to show unity. Rajoy suggests all of Spain should hold a referendum on Catalan independence instead.

The Sunday vote marked a record (over 77%) turnout for Catalan elections.