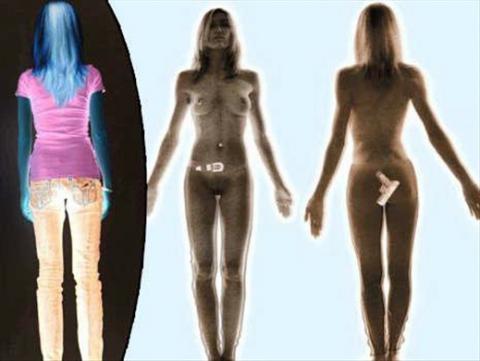 Technology, the now ubiquitous image of overzealous and under-trained US airport security staff and gender diversity all clashed in full social media view recently at the Orlando International Airport, which serves the tourist-laden area in central Florida.
According to media reports, a transgender traveler was held by airport security because her/his … penis showed up as an “anomaly” on full-body security scanners.
This is how Shadi Petosky Tweeted the following photo:
“I described what the flagging screen looked like to an artist. This is the anomaly.”

Petosky said she felt humiliated after being subjected to a 40-minute “double pat down” by TSA security personnel. The transgender human also missed a flight to Minneapolis.
The male external genitalia was flagged up as an anomaly on the scan.

The writer was taken into a private room where she told Transportation Security Administration (TSA) officials she was transgender, explaining ‘That’s my penis’.
TSA staff reportedly then told her she needed to pass through the full body scanner as a male.
“I’m embarrassed about it. It is just a coincidence that I got a pat down for my genitals, then I had the worst agent and then I tested positive for explosives.”

What made the story even more interesting is that Petosky liberally Tweeted the incident as it happened!