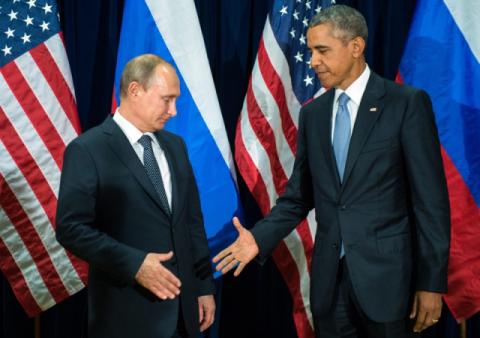 Russian President Valdimir Putin (L) and US President Barack Obama (R) shake hands for the cameras before the start of a bilateral meeting at the United Nations headquarters in New York City, New York, USA, 28 September 2015.

The airstrikes, carried out by a "couple" of Russian bombers, were launched at targets near the city of Homs, located about 100 km east of a Russian naval base in Tartus, according to a senior US military official, Fox News said.

It wasn't immediately clear whether the airstrikes targeted positions of the Islamic State group, al-Qaeda or other forces opposed to Syrian leader Bashar al-Assad.

Russian President Vladimir Putin, received permission from parliament for Russian forces to take part in bombing raids earlier on Wednesday. The Federation Council, the upper House of Russia's Parliament, approved at a closed door session a request submitted by Putin to authorise the use of troops in Syria.

Russia will only provide aviation support to the Syrian government forces, Federation Council Speaker Valentina Matviyenko said on Wednesday commenting on the decision to authorise the use of Russian Armed Forces abroad.

"I will stress it ? we are talking only about providing aviation support to the actions of the regular Syrian army. We are not talking about participating in a ground operation," she added, according to TASS.