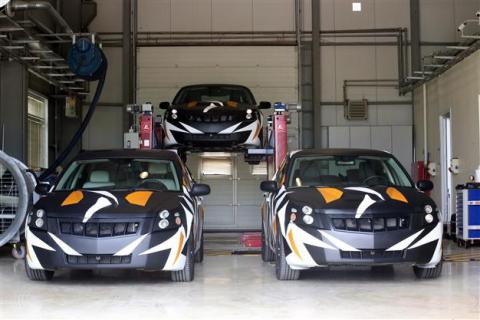 Turkish Science and Technology Minister Fikri I??k announced on Oct. 13 that three prototypes of the first Turkish-made cars have been developed, sharing the first camouflaged photos of these prototypes for the first time with the public.

Speaking at the Anadolu Agency Editors' Desk, I??k said production would begin in 2019.

About 40 cars will be produced, and will be tested under all conditions, he noted.

"We have been progressing upon a road map over the indigenous car production step by step. We have already produced three prototypes. These have been developed at the research and development center of the Scientific and Technological Research Council of Turkey [TÜB?TAK] in the northern district of Gebze [in Kocaeli province]. One of them is gasoline-driven, one is an electric car with an extended range, and the last one is an electric car. We hope we'll produce 30-40 vehicles by 2016 to test on open field conditions," he said.

He noted that Turkey can start mass production of the locally-made car by the end of 2019 unless political uncertainties further rise.

The Turkish car will hopefully be on the market by 2020, I??k said.

"We have calculated the project's costs. It is however not rational to reveal these calculations as long as a person accepts to coproduce this car with us," he said, adding that they invite any candidates to undertake this project as a manufacturer.

I??k said the locally produced car will be able to make 100 km a day with a charging cost of only 50-60 Turkish Liras.

"The share of local production will be around 90 percent," he said.

He noted Turkey has missed the train for the classic internal combustion motor technology,...