The changing size of the perfect penis: Ancient Greeks did not think bigger was better (pics) 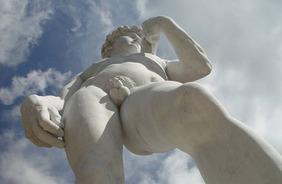 Since the beginning of time, man has pondered over an age-old question – What is the “ideal” penis? Much ado has been made over size, girth and even the desirability of superstition. The truth is that the idea penis varies from culture to culture and according to history…

We know from the statue that penises aren’t big and bold, but they are uncircumsized. In Ancient Greece, a civilized man was not driven by fleshy pleasures, and had a delicate and uncircumsized penis. Priapus, the fertility god, had a whopping penis but he was seen as an uncouth fun figure rather than a sophisticated lover. The foreskin was a mark of beauty for Ancient Greeks and Romans with the ideal one being three-quarters the length of the penis. However, a large size, was to be ridiculed rather than admired.

The land of the Kama Sutra believed more in compatibility than one-size-fits-all. There were three diffierent sizes: the hare (small), the bull (medium) and the horse (large). Sexual partners had to be identified so as to match. For instance, a hare male needed a deer woman, a bull had a mare paring and the largely-endowed horse needed an elephant girl. The right pairing made for the most pleasure.

Shunga art shows exaggerated genitals in both men and women to maximize impact. Penises are uncircumsized and have royal heads with popping veins. There’s plenty of public hair as well. Size, texture, fluidity were appreciated.

Huge padded constructions for crotches were created to show that size really did matter. The large constructions were very fashionable and looked a little like a full erection when worn as normal, everyday clothing. The French called these codpieces baguettes, and they may have been constructed to protect parts of the male anatomy during battle. These codpieces went out of fashion when Elizabeth was coronated, but size still mattered.