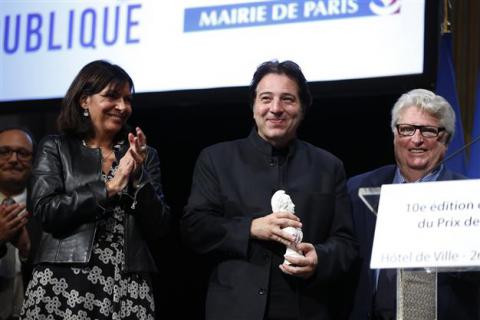 The event was hosted at the Paris Municipality Building with the attendance of French Prime Minister Manuel Valls and Paris Mayor Anne Hidalgo, along with other guests.

"Secularism is a concept identified with the Republic [of Turkey] founded by the courageous leader [Mustafa Kemal] Atatürk, in my home country, Turkey. It stood as an upper justice, which has given freedom to a range of philosophical approaches ensuring equal rights to its people dispersed under different beliefs and ethnic origins, both to believers and non-believers, aiming at taking part in the international scene competition in science, arts, sports and many others. However, as you all know, this state of Turkey has been dragged to a tragic change," Say said in his speech.

The role of arts in an 'imperfect' world

"The world is not perfect, however arts will contribute positively to this situation," said Say, referring to a "mindset of terror."

"In the beginning of 21st century, it is tragic for all of us to witness how the mindset of terror has reached a barbarous, inhuman point. The responsibility of this situation is the balances of power, both in the East and West. The threat is big; we are aware of the threat," he said.

"Time will show if arts will succeed in contributing to this imperfect world," the famous pianist added.

"We should all make an effort to make this world a peaceful place that we would like to leave to our children, grandchildren," he said.

Turkey completes one-third of portable wall on border with Syria